Fidel Castro works for the Pope 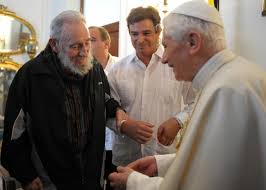 Fidel Castro was born on August 13, 1926 into a very prosperous family in Cuba. Castro was educated by Jesuits in Oriente and Havana, where he would graduate with a law degree. His mentor was a Jesuit named, Armando Llorente, who referred to young Fidel as "motivated, proud, and different from the others."

Shortly after graduating law school, Castro joined the Christian Democratic Party as a young and ambitious lawyer. Don't be deceived into thinking this was a Christian organization; it was without a doubt, a Roman Catholic Party.

Despite trouble with the law, a short jail sentence, and a brief exile to Mexico, Castro, in alliance with the Jesuits, returned to Cuba in 1956 with a new plan to overthrow Batista.
This came to fruition in 1959 during the Cuban Revolution, when Batista was forced to flee the Country.

After seizing power in Cuba, Castro wasted little time implanting his Marxist-Leninist ideology, driving out a large portion of the countries’ upper and middle class people. Castro's mission to communize and consecrate Cuba was a success. Cuba is now overwhelmingly a Roman Catholic nation.

This is further evidenced by ex-Jesuit, Alberto Rivera, when he exploited Castro as a Jesuit of the Fourth Vow.

We must never separate Jesuitism from Communism. It was the Jesuit’s who perfected the doctrine of communism on their Paraguay Reductions from 1609-1767.  If you want to trace the roots back even further, you can study the ancient Vow of Poverty found in the Catholic Encyclopedia. This is really an ancient monastic tradition.

Also note that Karl Marx was tutored by Jesuit General Peter Jan Beckx at the British Museum. He was nothing more than a tool used by the Jesuits to propagate this Doctrine.
Posted by James reber at 10:57 PM