Joseph Stalin was a Jesuit 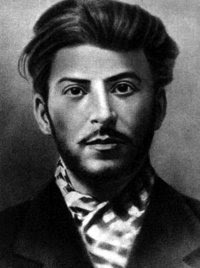 Joseph Stalin was born into a prominent Catholic family in Gori, Georgia. His father was a priest and his mother was a devout Catholic. Stalin was educated by Capuchin priests as a boy, and would later be accepted into Tiflis Seminary, a Jesuit institution.

Despite the Jesuits expulsion in 1820, by Alexander I, many Jesuits still remained within Russian territory, and maintained control of several institutions, including Tiflis Seminary. Stalin himself substantiates this in his interview with Journalist Emil Ludwig (Cohen).

Some historians propagate the theory that Stalin departed from the seminary shortly before graduating, but this position is untenable. The more logical and credible conclusion is that Stalin graduated as a Jesuit priest, with the assignment to infiltrate and manage the Georgian Underground Movement against the Russian Tsarist Government. Either way, we know he was Jesuit trained, and on mission to enforce the Jesuit doctrine of Communism throughout Russia.

By 1922, the country was broke, and many were starving. Desperate for reinforcements, American Companies along with Wall Street Financiers stepped in and helped the Bolsheviks get Russia going again. In April of the same year, Stalin was made General Secretary of the Central Committee.

With everything now in place, Jesuit General Wlodimar Ledochowski ordered for the death of Lenin, and gave full power of the Soviet Union to Bloody Joseph.

Stalin kicked it into high gear in 1939 when he began the outlawing of the Russian Orthodox Church, seizing thousands of schools and churches to be put in the hands of the Catholic Church.

A greatly suppressed fact is that the head of Stalin’s death camps in Siberia was none other than Cardinal Gregory Agagianian, his classmate at Tiflis. Together these sinister Roman Catholic classmates would kill tens of million of people in their death camps, far exceeding the casualties of Hitler in Germany. Sadly, this information has barely seen the light of day.

Toward the end of his life, Stalin had a falling out with the Catholic Church resulting in a strong suppression against them.

Shortly after these events, Stalin was given the poison cup and died on March 5, 1953.

“Practically every right-wing dictator of the period had been born and brought up a Catholic – notably Hitler, Franco, Petain, Mussolini, Pavelic, and Tiso (who was a Catholic priest).” – John Cornwell - Hitler's Pope (1999; p. 280)
Posted by James reber at 11:09 PM